NEWS RELEASE: ISSUED ON BEHALF OF THE BLACK SHEEP BREWERY The Black Sheep Brewery has teamed up with Brymor to create a brand new Rigg, Rum and Raisin flavour ice-cream. The inventive flavour, which infuses Black Sheep’s award-winning Riggwelter beer with Brymor’s signature Rum and Raisin ice-cream, has been extremely well received by customers from both the brewery’s visitor centre and Brymor’s ice-cream parlour. Riggwelter is one of the brewery’s strongest beers and has a distinct flavour with strong, rich espresso aromas, dark fruit and roasted malt flavours. This year commemorates the Brewery’s 20th anniversary plus Brymor is celebrating its 20th year at its current site at High Jervaulx Farm. Brymor’s ice cream is produced using milk from the herd of pedigree Guernsey cows that graze the surrounding farmland. High Jervaulx Farm is one of Britain's few genuine on-farm manufactures where only milk produced on the farm is used in the production of the ice-cream. Helen Allison, Marketing Manager for the Black Sheep Brewery said: “It may sound rather odd to put beer in an ice-cream but it really works. We have enjoyed developing the recipe with Brymor and the addition of a little chocolate alongside our Riggwelter has resulted in a perfectly balanced flavour. The beer is not overwhelming but provides just a little kick to its after-taste. Paul Casterton, Visitor Centre Supervisor for the Black Sheep Brewery, said: “Linking up with Brymor is a perfect partnership for us with Brymor situated just up the road from the brewery. We have had great feedback from our customers so far, in the intervals at our recent film nights, it was a popular choice. We hope that many more customers will take the plunge and try an ice-cream with beer in it!” Robert Moore, Managing Director of Brymor, said: “The new flavour has made a great addition to our range. We have 35 flavours of ice-cream and sorbets and are always looking for new and inventive ones for our customers to try. “When it was suggested we put beer in our ice-cream we were a little sceptical, but it works fantastically. Black Sheep’s Riggwelter fits perfectly with our creamy ice-cream, as its distinct flavour gives it a subtle twist.” ENDS CONTACT: Melanie Smith on 01325 363436 Notes to Editors: Please note the Black Sheep Brewery has a new logo, if high res version is needed please download from: http://www.recognitionpr.co.uk/journalistarea-story.asp?id=11216 The Black Sheep Brewery in Masham made its first beer in 1992 after being built up by Paul Theakston, whose family had brewed in the area for six generations. In a world of ever increasing bland, mass-produced beer Paul saw an opportunity to return to what his family had done best since 1827, making real beer in the time-honoured fashion. An old maltings building, once part of Lightfoot's Brewery became the Brewery’s home. This landmark building, which stands high over the banks of the Ure, had fallen in to disrepair as years of neglect as a semi-redundant grainstore had taken its toll. Paul assembled a small team around him to fight the rats and build a traditional country brewery. The Black Sheep Brewery name derived from Masham’s association with sheep, but ‘Sheep Brewery’ didn’t quite sound right, so with a little creativity from Paul’s wife the Black Sheep Brewery was born, a name that sat well with the area, spoke volumes about the maverick attitude to the multi-nationals seeking to dominate the brewing industry and captured the essence of the family struggle that led to our birth. Black Sheep Ale at 4.4% ABV, now in an eco-friendly lightweight bottle, continues to maintain its presence among the top ten premium bottled ale brands, and is available nationwide from virtually all the major supermarket retailers. It is a classic premium bitter and as with all Black Sheep beers, full of character derived from the best possible brewing materials, plenty of time and patience in the brewing and our very special Yorkshire Square fermenters. Twitter: Facebook: Share 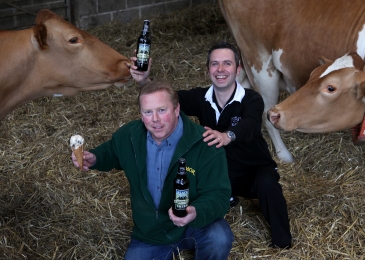