Members of the Milburngate development team have put their best foot forward to join staff from the Everyman Cinema Group on a nationwide charity effort.

The cinema employees formed several teams to collectively walk and cycle an 800-mile route linking up the Group’s entire network of venues, from Bristol in the south to Glasgow in the north.

This leg involved a team walking from the future site of Durham’s first boutique cinema, situated on the Milburngate development, to the Everyman cinema in the heart of Newcastle.

They were joined by Neil McMillan, Managing Director of iMpeC, together with other members of the development team, which is delivering the mixed residential and commercial development.

The nationwide trek aims to raise more than £20,000 in aid of MediCinema, which is dedicated to improving the welfare of hospital patients and their families through the shared experience of cinema. Donations can still be made through https://www.justgiving.com/fundraising/everysmile2019

Work is due to begin later this year on the construction of the Milburngate cinema, which will feature stylish seating, a fully licenced bar, food, table service, digital projection and surround sound technology.

Everyman CEO Crispin Lilly, who also took part in the walk, said: “This particular section of our charity event is slightly more unusual in that we are visiting the site of one of our future cinemas. However, once it opens its doors, I’m confident that it will quickly become a popular leisure destination for people in the Durham area.

“We felt it important to include it on our charity route as a way of welcoming the city to Everyman’s national network of cinemas.

“I’m incredibly proud of all those people taking part in this tremendous effort, which is raising money for an incredibly worthy cause.”

Neil McMillan said: “It’s fantastic to see the Everyman staff here today visiting the site of their future cinema and both I and the development team are pleased to support this charity effort.”

“The Everyman cinema will, together with a range of retail, high-quality restaurants and bars, shortly become a reality and create a highly desirable riverside destination contributing towards the regeneration of this area of the city.”

About the Richardson family

The Richardson family is a private, family-owned and operated property business with over half a century of real estate experience in the UK and overseas. Typically working in joint venture, the business has a long history of successful partnerships, having developed over 6 million sq ft of real estate across all sectors. More recently the family has continued to diversify by building an international growth capital portfolio across a range of sectors through a direct and co-investment programme. 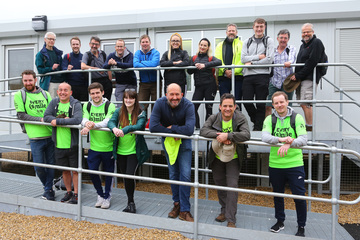 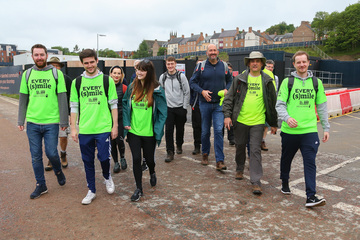 Members of the Milburngate team and Everyman team combined to walk to the route from Milburngate to Newcastle
Download Large Image
Latest Tweets from @Recognition1st :