Milburngate will offer visitors a greater choice of entertainment after Everyman Cinemas confirmed it is increasing the number of screens at Durham City’s landmark living, work and leisure destination.

Originally set to feature three screens, Everyman has committed to adding a fourth screen to the soon-to-be built boutique cinema, recognising its confidence in Durham City.

Everyman’s agreement to open a new-build cinema at Milburngate was its first move into the North East market, which was soon followed by establishing a venue in Newcastle-upon-Tyne in a converted building in Grey Street, which opened in May 2019.

With 31 locations, Everyman is one of the most innovative cinema operators in the UK, offering guests a very distinctive experience. The venues each feature unique and stylish cinema seating, a fully licenced bar, food, table service and digital projection and surround sound technology.

In addition to showing the latest cinema releases, Everyman offer a broad programme of films and special events including film festivals, seasons and live Q&As.

The Everyman cinema will be a cornerstone of phase one of Milburngate, which is being developed by a joint venture partnership between Arlington Real Estate and Richardson, supported by a £120 million forward funding commitment from LaSalle Investment Management.

Currently under construction on the banks of the River Wear in the heart of Durham City, Milburngate will feature, in addition to Everyman, a mix of premium leisure operators, such as Miller & Carter, as well as 153 built-to-rent apartments, a high specification office building, One Milburngate, and a 92-bed Premier Inn hotel.

Crispin Lilly, CEO at Everyman, said: “We have been very encouraged by the popularity of our venue in Newcastle and we are confident there will be the same buzz around our boutique cinema at Milburngate. Our venues provide an intimate and attractive space offering a diverse line up of films and events, together with quality food and drink, which guests will be able to enjoy in our expanded Milburngate cinema.”

Ben Holmes, director on behalf of Richardson, said: “The Everyman team share our vision for Milburngate to become a landmark leisure destination for the North East, and expanding its plans for their Durham boutique cinema is a real endorsement of its commitment to the area and our development.”

Allan Cook, Managing Director of Arlington Real Estate, said: “The interest in Durham as a social and leisure destination is definitely building, which is evident in Everyman’s decision to increase the number of screens at Milburngate. Their unique approach of offering guests not just a movie but a great night out is growing in popularity across the country and we are delighted that Milburngate will be bringing this to Durham”

According to the Sunday Times’ ‘Best Places to Live’ listing:

Richardson is a private, family-owned and operated property business with over 70 years of real estate experience in the UK and overseas. Typically working in joint venture, the business has a long history of successful partnerships, having developed over 6 million sq ft of real estate across all sectors. More recently Richardson has continued to diversify by building an international growth capital portfolio across a range of sectors through a direct and co-investment programme. 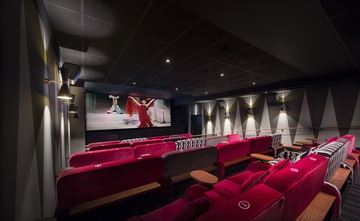