Milburngate has been announced as a major sponsor of the Lumiere Light Festival 2017 for the third successive time.

Lumiere is a biennial event which, between 16-19 November, will transform the historic city into a giant gallery featuring dramatic light installations attracting hundreds of thousands of visitors.

The Milburngate site, which is currently being developed into a brand new, £150m living, working and leisure destination will, once again, host one of Lumiere’s largest light installations, details of which will be unveiled later in the year.

The developers behind Milburngate, a consortium consisting of Carillion, Arlington Real Estate and Richardsons Capital LLP, are long-term supporters of Lumiere. In 2013 they helped transform Milburngate House on Framwelgate into a visual jukebox and two years later the site hosted Cloud, an installation made up of hundreds of individual lightblubs.

Allan Cook, Managing Director of Arlington Real Estate, who is also chair of the Lumiere development board, said: “We are delighted to continue to support this major cultural landmark, which has garnered world-wide attention and acclaim.”

“As well as being a visual feast, Lumiere now plays a key role in attracting many new UK and overseas visitors to Durham City and to the wider North East region with the resulting economic dividend that comes from that.”

Produced by arts charity Artichoke the UK’sleading creative producer of art in the public realm and commissioned by Durham County Council, with additional support from Arts Council England, Durham University and a host of further funders and supporters, the four-day festival will feature around 30 bespoke installations from internationally-acclaimed artists.

Sarah Coop, Development Director at Artichoke said: “Milburngate has been a key sponsor of Lumiere ever since we first came to Durham. Its developers’ continued support for the festival means we can house another significant installation at their riverside site, which can be viewed from a number of different points in the city. Now we can’t wait to release more details of their sponsorship in October, when the complete festival line up will be announced.”

In 2015, the festival attracted an estimated 200,000 visitors to Durham, making a regional economic impact calculated at £9.6million.

Carillion is a market leading support services group focused on infrastructure and property services with a portfolio of Public Private Partnership projects, selective construction capabilities and a sector leading ability to deliver sustainable solutions. The Group had annual revenue in 2016 of some £5.2 billion, employs around 43,000 people and operates across the UK, in the Middle East and Canada. 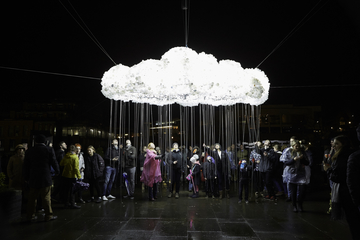