Building on the legacy of the city’s highly successful Lumiere Festival, plans for a new permanent public art light installation for Durham City are being unveiled.

The developers of Milburngate and Lumiere producers Artichoke alongside Lumiere commissioner Durham County Council are coming together to create the new public art, which will be installed in the city’s railway arches.

As part of Lumiere in November the arches were home to Arclight, a colour-changing light installation by artist Vicky Hay, one of a series of dramatic pieces of artwork that attracted 240,000 people to the city during the four-day festival.

Following its success, Artichoke will now be engaging with artists to design a new, permanent light installation at the arches adjacent to the roundabout alongside the Railway Station. It is planned to be completed in autumn 2018.

The new installation is sponsored by the developers of Milburngate, Arlington Real Estate and Richardsons family, who are long-term supporters of Lumiere. Most recently, their Milburngate site hosted the Fire Tornado installation whose 16 metre high vortex flames lit up Durham’s riverside during Lumiere 2017.

Allan Cook, Managing Director of Arlington Real Estate, said: “The viaduct is a much loved land mark of Durham and this installation will lift its prominence in keeping with the iconic Castle and Cathedral as well as highlighting the continuing cultural impact of Lumiere on the city.

“We are very proud to again be working with Artichoke and Durham County Council to create this piece of Lumiere legacy, which will continue to help shine a light on our beautiful and vibrant city.”

Sarah Coop, Development Director at Artichoke said: “The developers of Milburngate have been terrific supporters of Lumiere from the beginning, and again in 2017, and we’re thrilled to be working with them and Durham County Council on a permanent light installation at the arches.”

Cllr Simon Henig, Leader of Durham County Council, said: “Every Lumiere leaves a lasting effect on our county, local businesses and the many thousands of people who are drawn to the light festival.

“That’s why it’s wonderful to have a permanent installation to light up the viaduct along this beautiful section of our railway network, and cement Durham’s status as a place of light.”

The development consortium consists of Arlington Real Estate and the Richardsons family.

Arlington Real Estate is also delivering another flagship County Durham development, DurhamGate. Located five miles south of Durham City, DurhamGate is on the site of Black & Decker former UK headquarters and, at 60 acres, is the largest regeneration project in the North East.

The Durham Riverside Renewal project includes the regeneration of Freemans Reach and the redevelopment of Milburngate House, which are on adjacent banks of the River Wear in the heart of Durham City. 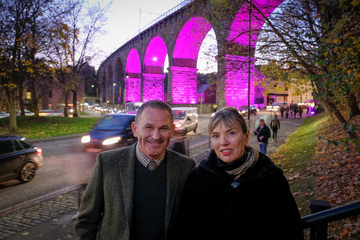 Allan Cook (left) and Sarah Coop (right) in front of the Railway Arches during Lumiere 2017, which will be home to a permanent legacy installation
Download Large Image