Milburngate has reached a significant milestone in the development of its Durham City centre scheme with the completion of the steel work for the new Premier Inn hotel.

The hotel forms a key element of phase one of the living, working and leisure destination, which is due for completion in 2022.

The structure gives an indication of the outstanding views from the hotel of Durham’s riverside and the UNESCO World Heritage site featuring the cathedral and castle.

Containing 740 tonnes of British steel, supplied by North East based Finley Structures Ltd, the framework of the 92-bed room hotel has been completed by its sub-contractors and paves the way for the next stage of development, which includes the installation of windows and weather tightening before internal works begin before Christmas.

Joining the Premier Inn hotel at Milburngate will be Whitbread’s Bar + Block Steakhouse restaurant. Together the hotel and restaurant are expected to create up to 75 jobs in Durham City on opening.

The Premier Inn and Bar + Block restaurant will take their place alongside a number of other premium leisure operators, as well as an Everyman Cinema, at Milburngate, which is being delivered by a joint venture partnership between Arlington Real Estate and Richardson, supported by a £120 million forward funding commitment from LaSalle Investment Management.

Allan Cook, Managing Director of Arlington Real Estate, said: “This is an exciting moment for Milburngate as we are really starting to see phase one take shape with the completion of the steel work of the Premier Inn and the three apartment blocks which will see 153 build-to-rent apartments delivered right in the heart of the city. The Premier Inn and Bar & Block restaurant is an excellent fit for Milburngate, and we are really looking forward to completion of this phase of the development, which will create much needed additional hotel rooms for our city.”

Richard Aldread, head of construction for Premier Inn in the north of England, Scotland, and Ireland, said: “Milburngate is a fantastic development for Premier Inn to be part of in Durham.

“The new Premier Inn hotel will give our guests a prime location to stay in the city centre, a stone’s throw away from Durham’s historical colleges, and with lots of on-site leisure options to enjoy during their stay.

“We’re confident the Premier Inn hotel and Bar + Block restaurant will trade very well once we open our doors to guests and diners in 2022 and we can’t wait to become part of the community when we do.”

David Thompson, regional director for Tolent, said: "The team continue to make great progress across the site and works to the external facade of the Premier Inn will begin in the next few weeks. Following this, internal works can start to begin creating the individual rooms, corridors and restaurant in the period leading up to Christmas."

The development consortium consists of Arlington Real Estate and Richardson.

According to the Sunday Times’ ‘Best Places to Live’:

Richardson is a multi-generation family business with over half a century of real estate experience in the UK and overseas. Working across all sectors, they have developed well in excess of seven million square feet of property. Recent projects include Nickel, junction 28 off the M1, a new spec build 261,000 sq ft warehouse, Western 105, Avonmouth, a new spec build 105,500 sq ft warehouse, Freemans Reach, a 110,000 sq ft office development in Durham, Lincoln Gateway, a £28m, 519 bed student accommodation scheme. More recently the family has continued to expand its operations by building an international growth capital portfolio across a range of sectors through a direct and co-investment programme.

Tolent was formed in Tyneside in 1983. Since then we have amassed a huge variety of projects encompassing all types of building and civil engineering work in the public and private sectors.

One of Tolent’s greatest strengths is its versatility which enables us to deliver efficiency and excellence in projects of all sizes, whether they’re repair works valued at £5,000 or a £100 million contract for a flagship development.

Premier Inn was named the UK's top-rated hotel chain for 2018 according to Which? With more than 800 hotels and over 78,000 Premier Inn rooms across the UK and Ireland, Premier Inn guests are never far from a great night's sleep at fantastic value rates.

Premier Inn hotels are in more locations than any other UK hotel brand for the ease and convenience of leisure and business travellers alike.

All Premier Inn bedrooms feature en-suite bathrooms, a luxurious Hypnos® bed, a choice of pillows, TV with Freeview and free Wi-Fi. A bar and restaurant is situated either on-site or next door to each hotel, offering a wide range of food and drink including a delicious all-you-can-eat breakfast.

Across the estate, the average Trip Advisor score for Premier Inn hotels is 4.2. Premier Inn has been awarded the Best UK Family Hotel in the TripAdvisor Travellers' Choice Awards, Best UK Hotel Group in the Silver Travel Awards and the Business In The Community Environmental Leadership Award. In 2018 Premier Inn was also named the UK’s top-rated hotel chain for the fourth year in a row by Which?

Great Ormond Street Hospital Children's Charity is the National Charity partner of Premier Inn and to date team members, guests and suppliers have reached the milestone of £10 million, which formed part of the funding towards the Premier Inn Clinical Building, officially opened by HRH The Duchess of Cambridge in January 2018.

Outside of the UK Premier Inn is expanding rapidly in Germany with nineteen trading hotels and an open and committed pipeline of almost 10,000 bedrooms across 52 hotels. By the end of 2020 Whitbread expects to operate a total of 20 Premier Inn hotels across Germany 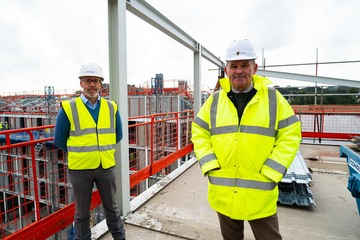