Service held across the River Wear to mark Remembrance Day

A special two-part service was held on both sides of the River Wear to mark Remembrance Day in Durham City.

Staff from National Savings and Investments (NS&I), Her Majesty’s Passport Office and the developers of the Freeman’s Reach development attended a Remembrance Service, which began at Milburngate House on Framwellgate Waterside and concluded at Freeman’s Reach across the river.

The service marked the completion of the journey taken by a war memorial, which was previously located in NS&I’s Milburngate House offices and has been installed in Freeman’s Reach ahead of the organisation moving into the new development next year.

The service was led by Deacon Annette Sharp, the Methodist Deacon who serves in the Durham and Deerness Methodist Circuit, which includes the city centre Methodist Churches of Elvet, North Road and Framwellgate Moor.

The service included the two minutes silence at 11am to remember those who lost their lives in conflicts including the First and Second World Wars.

A wreath of poppies was laid by NS&I staff to conclude the first part of the ceremony before Deacon Sharp and representatives from the organisation, HMPO and the developers of Freeman’s Reach made their way across the Penny Ferry Bridge to lay a second wreath at the recently-installed war memorial.

Ian Beaumont, Project Director for the Freeman’s Reach Development, which is a development being delivered through a partnership between Carillion Developments, part of Carillion, Arlington Real Estate and Richardsons Capital LLP said: “We were very proud to be part of this special Remembrance Day service.  It demonstrated how important the memorial is and what it represents is to the staff at National Savings & Investments and we are delighted to be able to incorporate it into the organisation’s new offices at Freeman’s Reach.”

Helen Hawkley, Assistant Director of Commercial Assurance at National Savings and Investments, said: “This was a particularly poignant service as it marked the 100th anniversary of the First World War.

“It was also the last Remembrance Day we will hold in Milburngate House so it was very appropriate to hold the service in two parts to mark the journey that has been made by our war memorial, which acts as a constant reminder of the sacrifices made by so many in conflicts around the world.”

The development consortium for the Freeman’s Reach project is consists of Carillion Developments, part of Carillion plc, and Arlington Real Estate, supported by Richardsons Capital LLP. The project is funded by Legal & General.

Carillion is a leading integrated support services company with a substantial portfolio of Public Private Partnership projects and extensive construction capabilities.  The Group had annual revenue in 2013 of some £4.1 billion, employs around 40,000 people and operates across the UK, in the Middle East and Canada.

Carillion is a member of the FTSE4Good Index and in 2013 the Group was awarded Platinum Big Tick status in Business in the Community’s Corporate Responsibility Index. It has also achieved a position on the 2013 FTSE 350 Climate Performance Leadership Index and the Climate Disclosure Leadership Index, placing it within the top ten UK companies with regard to actions to mitigate climate change.

The Group has four business segments:

This and other Carillion news releases can be found at www.carillionplc.com 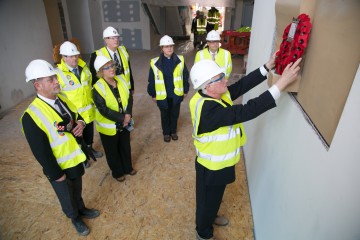