Updated plans to deliver increased mix of living, working and leisure at Milburngate

The developers of Milburngate have submitted an updated detailed planning application to Durham County Council for the landmark living, working and leisure development, which will see 70 percent of the project completed in its first phase.

As a result of improvements made, this first phase of Milburngate will contain a greater mix of uses featuring 153 apartments, a 92-bed, flagship Premier Inn hotel, and 5,000 square metres of offices, which will support up to 500 new jobs.

Bringing forward more than half of the development’s residential properties in the first phase will help enhance the supply of much-needed homes in Durham City, and the inclusion of the offices, which was not originally part of the first phase, will also support the immediate need for high quality, business accommodation in the city.

The homes, offices and hotel will be joined by nationally-recognised, premium leisure occupiers including Everyman, which made its first commitment to the North East with an agreement to open a boutique cinema at Milburngate, together with bar and restaurants, Pitcher & Piano, Bar + Block and Miller and Carter.

As part of this, the developers are bringing forward the completion of Milburngate’s riverside public realm; meaning 85 percent of the public space will be completed in phase one, helping provide crucial connectivity, not only through the development, but between the railway station, riverside and the city centre.

Included in the updated application are a number of improvements, based on continued consultation with local stakeholders, such as revised access to the service area and short stay car park and the addition of pitched roofing to the hotel.

The hotel represents a marked step-change in the aspirations for the Premier Inn brand. Its owner, Whitbread, has been keen to identify locations across the UK to help further the growing reputation of the brand. The hotel is of high architectural quality, in keeping with the rest of the development, and sympathetic to its environment similar to other Premier Inn hotels in historic cities.

Whitbread has recognised Milburngate will support this strategy and is including a new-style of interior design to match the quality of the development. It will also feature Premier Inn’s heritage signage, which can be found on its hotels in other notable cities such as Edinburgh and York.

Subject to planning consent in December, construction of Milburngate will begin in the first quarter of 2019. The developers are currently in the final stages of selecting a construction partner who will be announced early next year. Completion of the first phase is targeted at early 2021.

Milburngate is a £150m development being delivered by a joint venture of Arlington Real Estate and the Richardson family who have successfully delivered a number of strategically important regeneration projects across the region, including Freemans Reach in Durham city centre.

Allan Cook, Managing Director of Arlington Real Estate, said: ““This enhanced first phase of development at Milburngate will accelerate delivery of the scheme and deliver a greater blend of complementary uses earlier than originally expected. This is further testament to the very strong interest we have had from national and regional occupiers alike which is great for Durham City as well as the wider region”

“The growing trend for mixed-use city destinations has influenced our updated designs, particularly to help businesses attract young professionals who want to live, work and enjoy themselves in city centres.”

Ben Holmes, Director at Richardsons, said: “The updated designs for the first part of Milburngate, which include important feedback from local stakeholders, reflect the synergies we aimed to achieve across the whole development.

“Delivering elements of the development earlier than originally planned, to complete 70 percent of the entire project, will support Milburngate’s position as a catalyst for job creation and a magnet for leisure visitors looking for a premium and unique experience unavailable at other locations in the North East.” 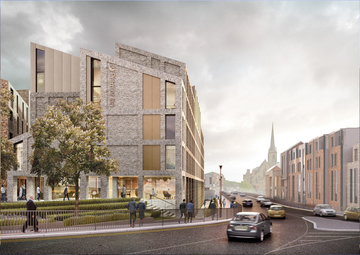 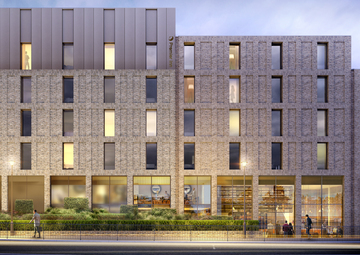 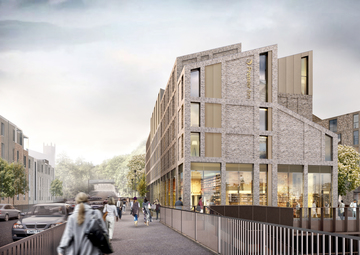 CGIs of the updated design of the hotel development at Milburngate
Download Large Image
Latest Tweets from @Recognition1st :