The developers of Milburngate have discovered the remains of Victorian Gas Works on the site on Durham’s Riverside, which will become part of a UK heritage project.

Buried several metres below the surface, the site team discovered a flue structure made of firebricks, which was part of the old retort house – where coal was baked in a type of oven called a retort, to release gas from the coal.

It was thought that the construction of the Passport Office building in the 1960s had destroyed anything of significance from the old gasworks, so the unexpected discovery enabled Milburngate’s developers to do something positive by recovering the bricks for the heritage project.

The bricks were part of the gasworks at Framwellgate owned by the City of Durham Gas Company, which was formed in 1856. Durham had earlier adopted gas lighting in 1823 and a year later the whole city was lighted by gas from a privately-owned works, which was later sold to Durham Gas Company and subsequently moved to the Riverside.

Most of the former gasworks structures were located to the north of the site and underneath the former Passport Office. The flue of the retort, which was discovered, was constructed below ground level, which ensured its survival over the past century.

The recovered Victorian bricks are now destined for a project in the East Midlands where a Building Preservation Trust is regenerating a historic gasworks in the estate village of Sudbury, Derbyshire.

The Sudbury Gasworks Restoration Trust (SGRT) is preserving, restoring and refurbishing a Grade 2 listed 1874 gasworks in Derbyshire and the bricks will be used to rebuild the building’s retort. Thanks to National Lottery players, SGRT has received initial support and development funding* from the Heritage Lottery Fund (HLF) for a project to create a new community resource in Sudbury parish.

It is also sympathetically extending the building on the footprint of its former gasholder storage facility to create a new main hall for events, which will hold up to 100 people.

Members of the Milburngate development team, including Thompsons of Prudhoe and engineering services specialist WSP, undertook a programme of works to ensure the bricks could be safely recovered from the site and transported to Derbyshire.

The remains of the retort were discovered during enabling and remediation works ahead of the start of construction later this year of the first phase of Milburngate which, upon completion, will provide a range of premium leisure facilities, bars and restaurants, high quality offices and luxury apartments.

Ian Beaumont, Project Director of Milburngate, said: “These bricks represent an important part of UK industrial heritage and we have the opportunity bringthem back into use after being buried under the site for more than 100 years. The Sudbury Gasworks project is the ideal location for the firebricks as they will not only help with the restoration of the building, but help educate future generations about the engineering advances made by the Victorians.”

Prof. Russell Thomas, Technical Director - Ground Risk and Remediation, at WSP, said: “It’s fantastic to be able to support a project that recognises the important role coal played in England for many, many years. I was aware of the project at Sudbury and when the bricks were discovered under Milburngate I knew they could be of practical benefit to the Trust in Derbyshire. Both regions have strong coal mining heritage and it’s with excitement that I await the building’s restoration.”

Timothy Webber, SGRT chair, said: “We are extremely grateful to the team at Milburngate for the donation of these bricks, which will be incorporated into our restoration of the Sudbury Gasworks. The building, including the retort house, will give visitors a better understanding of how gas was produced from coal and the various functions of the rooms within the gas house, while creating a new community resource for our area.”

About the Heritage Lottery Fund

Thanks to National Lottery players, we invest money to help people across the UK explore, enjoy and protect the heritage they care about - from the archaeology under our feet to the historic parks and buildings we love, from precious memories and collections to rare wildlife. www.hlf.org.uk. Follow us on Twitter, Facebook and Instagram and use #NationalLottery and #HLFsupported.

* HLF Heritage Grants applications are assessed in two rounds. Sudbury Gasworks: Rescued and Restored project has initially been granted round one development funding of £116,800 by the Heritage Lottery Fund, allowing it to progress with its plans. Detailed proposals are then considered by HLF at second round, where a final decision is made on the full funding award of £1,273,500.

History of gas and the riverside gas works in Durham

Durham adopted gas lighting in 1823 and by the beginning of 1824 the whole city was lighted by gas. The gasworks were privately owned by Mr. West, who later sold them to Durham GasCompany. The gasworks are believed to have later moved to the banks of the River Wear near Framwellgate, and became the property of the City of Durham Gas Co. which was formed in 1856. The gasworks were rebuilt a couple of times in the 19th century and in 1898 a 56,548 ft3 column-guided gasholder in a steel tank was built at the gasworks by Robert Dempster & Sons Ltd.

Incandescent street lamps were introduced in Durham in 1902, due to competition from the installation of electric lighting 1901. In 1902, the City of Durham Gas Company, was managed by E.H.Millard (engineer) and producing 106m ft3 annually.By 1914 the gasworks was producing 120m ft3 of coal gas per year and it had also introduced the manufacture of Carburetted Water Gas (CWG), a rapidly way of manufacturing gas, developed in the USA.

In 1936, City of Durham Gas Company produced 153m ft3, of gas from horizontal retorts and CWG. At this time four gasholders provided a storage capacity of 275,000 ft3. A new larger gasholder was built in 1937 by the Ashore, Benson, Pease and Company of Stockton-on-Tees, a specialist gasworks engineering contractors.

The gasworks reached its full extent in 1939, after this the City of Durham Gas company looked to start purchasing gas from the numerous coke ovens. Whilst in 1940 the company still produced 138m ft3 using, they had already made an application for the purchase of coke oven gas.

In 1941 gas making was rumoured to have ceased in favour of a Coke Oven Gas supply from Stella Gill, however in 1945, 170m ft3 was still being produced. By 1949 a total of 253m ft3 was being purchased and in 1951 a new 12" gas main from Brancepeth Coke Ovens released part of the Stella Gill supply for transmission to the Washington area. A small manufacturing capacity was retained at the gasworks, but by 1959 the gasworks had largely been demolished. By 1975 only a single gasholder remained on the site along with some ancillary depot and storage buildings. 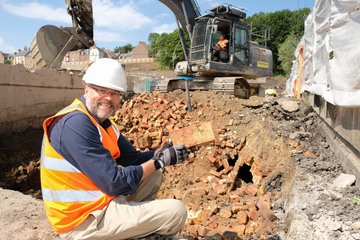 Ian Beaumont, Project Director of Milburngate, holding one of the Victorian bricks recovered from below the site from the retort (back right)
Download Large Image