The developers delivering the regeneration of Durham’s Riverside have installed a unique public art installation at Freemans Reach. Unveiled on the eve of the Lumiere Durham Light Festival, the installation celebrates the history of water power in the city.

The illuminated glass sculpture entitled Confluence uses local imagery to chart Durham’s history and the use of water power on the riverside from the 11th century up to the present day and the Archimedean screw at Freemans Reach.

Designed and created by American artist Jeffrey Sarmiento, who is Reader in Glass at the University of Sunderland, and supported by local resident and history enthusiast Rosemary Zakrewski, Confluence consists of two features mounted to the south and east facades of the Freemans Reach kiosk opposite the entrance to the new HM Passport Office.

Four long glass panels display Jeffrey’s ‘Durham Mill Encyclopaedia’ of landmark moments in the site’s history. On the other site a lenticular agamograph made of glass prisms reveals an image of the Archimedean screw when viewed from one angle and an image of Archimedes and Durham Bishop Hugh De Puiset when viewed from the other angle.

A significant regeneration project at the heart of Durham, Freemans Reach has helped retain valuable jobs in the city centre by providing high quality, sustainable offices for National Savings and Investments (NS&I) and Her Majesty’s Passport Office (HMPO).

It has also been the catalyst for the next stage of the riverside’s regeneration, the transformation of the site on the opposite bank of the River Wear, which will become the new, £150m living, working and leisure destination, Milburngate.

Milburngate will feature an Everyman Cinema and a range of premium restaurants and bars including a Pitcher and Piano. The development will also include high-specification apartments and high-quality, energy-efficient office space.

It is also a key sponsor of Lumiere 2017 and will host one of the festival’s major installations, Fire Tornado, on the site next to the river.

Allan Cook, Managing Director of Arlington Real Estate, said: “Freemans Reach is synonymous with hydro-power and this art installation is a perfect way to help share this part of Durham’s past, present and future with local people and the thousands of visitors who come to the city every year.”

Jeffrey Sarmiento said: “I was very proud to be asked to be part of this unique art project. Durham City’s long history, together with the new Archimedean screw, at Freemans Reach has provided me with plenty of inspiration.”

Carillion is a market leading support services group focused on infrastructure and property services with a portfolio of Public Private Partnership projects, selective construction capabilities and a sector leading ability to deliver sustainable solutions. The Group had annual revenue in 2016 of some £5.2 billion, employs around 43,000 people and operates across the UK, in the Middle East and Canada. 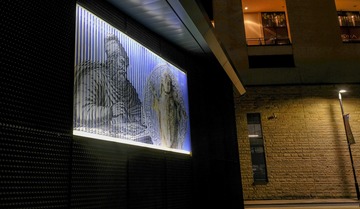