Whitbread to bring Premier Inn and Bar + Block to Milburngate

The developers of Milburngate have reached two significant agreements with Whitbread that will see a Premier Inn hotel and a new concept steak restaurant, Bar + Block, open in Durham City.

Joining Durham’s existing Premier Inn on the opposite bank of the River Wear at Freemans Place, the new 92-bed hotel, which is subject to planning approval, will be one of the most contemporary in Whitbread’s portfolio to complement the premium styling and design of Milburngate.

Joining the hotel at the development will be Whitbread’s Bar + Block Steakhouse, which will be the first in the North of England. Combined, the two will create 75 new jobs in Durham City.

With four restaurants across the UK in London Kings Cross, Birmingham, Bath, and Whitley in Hampshire, Bar + Block is an informal all-day dining venue serving breakfast, lunch and dinner with an emphasis on high quality steaks at affordable prices, all hand-cut to order. The restaurant will feature a ‘Butcher’s Block’ with a range of rotating specials, as well as an extensive drinks list.

A landmark development for Durham and the wider North East region, Milburngate will also feature a mix of luxury apartments and high quality offices. Leading to the creation of more than 1,000 new jobs, Milburngate is being developed by Arlington Real Estate and the Richardson family.

Allan Cook, Managing Director of Arlington Real Estate, said: “These agreements not only demonstrate the confidence Whitbread has in Durham City, but also how Milburngate can help position and strengthen two of its important brands.

“Milburngate’s aspirational and premium offering is attracting high quality operators that will enhance and expand the leisure market in Durham and help attract visitors from across the North East and further afield to the city.”

Ben Holmes, Director at Richardsons, said: “Milburngate is a great opportunity for Whitbread to further develop its presence in Durham City to meet the demand for hotel beds in the area while introducing a new concept dining experience to the region. We’re proud to be working with Whitbread and look forward to welcoming the hotel and steakhouse to the development.”

Matt Aubrey, Premier Inn Acquisitions Manager for the North East, said: “We are pleased to have acquired a site for a new 92-bed Premier Inn and Bar + Block restaurant at the Milburngate development in Durham. Milburngate is a major part of the future of Durham city centre and we are excited to be a part of it. Subject to planning permission, the new hotel and restaurant will bring 75 permanent jobs to the area and will offer visitors greater choice and value in Durham.”

Photo caption: One of Whitbread’s Bar + Block steakhouses, which will be part of the Milburngate development

THE HIGH RESOLUTION PHOTOGRAPH TO ACCOMPANY THIS NEWS RELEASE CAN BE DOWNLOADED FROM:

Arlington Real Estate is also delivering another significant County Durham development, DurhamGate. Located five miles south of Durham City, DurhamGate is on the site of Black & Decker former UK headquarters and, at 60 acres, is the largest regeneration project in the North East.

The Durham Riverside Renewal project includes the regeneration of Freemans Reach and the redevelopment of Milburngate House, which are on adjacent banks of the River Wear in the heart of Durham City.

Richardsons is a private, family-owned and operated property business formed over sixty years ago and headquartered in the West Midlands. The company is primarily focused on property development and investment in the UK and overseas. Typically working in joint venture, the business has a long history of successful partnerships, having developed over 6 million sq ft of real estate across all sectors.

According to the Sunday Times ‘Best Places to Live’ listing:

Premier Inn was named the UK's top-rated travel brand 2016 and the top-rated hotel chain for 2017 according to Which? With over 750 budget hotels and 70,000 rooms across the UK and Ireland, Premier Inn guests are never far from a great night's sleep at fantastic value rates. Premier Inn hotels are in more locations than any other UK hotel brand for the ease and convenience of leisure and business travellers alike.

All Premier Inn bedrooms feature en-suite bathrooms, a luxurious Hypnos® bed, a choice of pillows, TV with Freeview and free Wi-Fi. A bar and restaurant is situated either on-site or next door to each hotel, offering a wide range of food and drink including a delicious all-you-can-eat breakfast.

Guests who book direct through the Premier Inn website are able to enjoy Premier Inn Saver rates. The lowest price is available at premierinn.com (terms and conditions apply).

Premier Inn employs over 19,000 team members and is part of Whitbread PLC which this year celebrates its 275th Anniversary as a great British business. Whitbread PLC achieved 8th place in The Sunday Times Best Big Companies to Work for in 2017, an accolade awarded as the result of direct team member feedback.

Great Ormond Street Hospital Children's Charity is the National Charity partner of Premier Inn and to date team members, guests and suppliers have raised over £7 million, which is going towards the opening of the Premier Inn Clinical Building, due to be completed in Autumn 2017.

Outside of the UK, Premier Inn's expansion plans are focused on two key markets, Germany and the Middle East. Premier Inn opened its first hotel in Frankfurt earlier this year and also operates hotels across the United Arab Emirates. 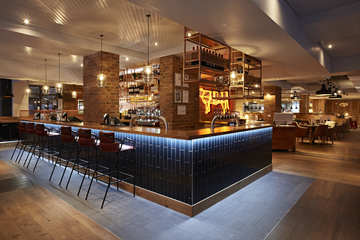 One of Whitbread’s Bar + Block steakhouses, which will be part of the Milburngate development
Download Large Image
Latest Tweets from @Recognition1st :