Is social media overrated or are young people too lazy to work?

Britain’s best-known plumber Charlie Mullins has questioned the power of social media after an apprenticeship he was offering via Facebook only attracted 21 applications. Charlie, who is Managing Director of London’s largest plumbing company, Pimlico Plumbers, regularly receives hundreds of applications for apprenticeships through traditional methods, but found the Facebook route to be less fruitful. Over a two week period Pimlico Plumbers offered young people the chance to apply for an apprenticeship by simply posting 100 words on the company’s Facebook page using the hashtag #pickmecharlie. The opportunity was also shared by thousands of twitter users and by Further Education colleges who encouraged their students to take part. The lack of interest has also led Charlie to question his previously unwavering support of young people who he has continually spoken up for with fellow business people and politicians to promote the benefits of apprenticeships. Charlie said: “ I just don't get it; every month we get loads of people asking me about apprenticeships, but when I put one up for grabs it seems nobody can be arsed to write 100 words telling me why they should be the lucky one. And if that's the truth - god help us all because this is, as I'm always saying, the next generation of skilled workers we're talking about here. “My head is hurting trying to think of an explanation other than that young people are too lazy to bother. It's not as if the competition hasn't been well publicised. It's been tweeted and retweeted to hundreds of thousands of accounts, and I've seen more names of people who should go for it suggested on Twitter, by well-meaning others, than I have applicants. The only other thing I can come up with is that social media is complete rubbish and we've all been scammed, just like in the Emperor's New Clothes. Are we all kidding ourselves, and each other, that the internet and social media is actually a viable business tool? Or is its actual benefit to the world no more than an easy way to watch movies and book holidays? “I'm hoping there's a third answer to this staggering result but I'm struggling to know what it is.” ENDS NEWS RELEASE: ISSUED ON BEHALF OF PIMLICO PLUMBERS CONTACT: Jamie Collis on 01325 363436 Editor’s Notes: About Pimlico Plumbers Launched by Charlie Mullins in 1979 with just a bag of tools and a very old van bought at auction, Pimlico Plumbers now has 200 professional trades people and a support team of around 50 staff serving customers across London including some of the world’s most famous names including James Bond star Daniel Craig and actress Dame Helen Mirren. The company, which has a turnover of £18 million, serves central and greater London and currently has more than 150 vans, trucks and motorbikes on the streets of the Capital. Charlie is the archetypal entrepreneur having started his business from scratch and building it into a multi-million pound enterprise. His company’s iconic blue and white vans can also been seen in Spain after Charlie launched a Marbella branch of the company last year to serve both local and ex-pat customers. Outspoken and often controversial, Charlie has starred in Channel 4’s ‘Secret Millionaire’ and the BBC’s ‘Young Plumber of the Year’ programmes and is a regular business commentator in the national media. 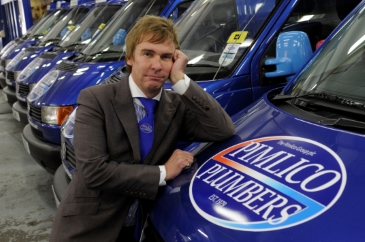