Tees Components and Dormor Machine & Engineering Chairman Clive Wood has been awarded a Member of the British Empire (MBE) in the HM The Queen’s Birthday Honours for services to industry & skills, and for voluntary services to the community.

Clive, 69, has made a considerable contribution to the East Cleveland and Tees Valley areas throughout his career.

He left school at 15 without any qualifications, securing an apprenticeship at a local engineering company, before gaining employment operating machine tools at Head Wrightson. After a stint as a sales representative he joined Tees Components in Skelton, which he acquired in the 1970s and has been a family business ever since.

At the time the company employed around 20 people providing milling services to local steelworks. Since then Tees Components has grown to become one of the UK’s leading heavy engineering subcontractors, employing around 100 people and operating in sectors including renewable energy, marine and defence.

Clive also took over Dormor Machine & Engineering Company, based in South Bank, Middlesbrough, in the 1980s and again developed this as a CNC machining and assembly subcontractor, successfully providing services to marine, mining, and crushing sectors.

Much of the development of the two companies’ workforces has come from Clive’s commitment to championing apprenticeships and supporting the promotion of careers in engineering in the local area. As a result, 40 percent of the combined group’s workforce have gone through a company apprenticeship, with Clive establishing excellent relationships with local schools, colleges and training providers that continues today.

The success of the companies has also helped Clive achieve his ambition to support local communities. Although modest and understated in his philanthropic works, Clive has, throughout the years, supported more than 50 charities, community organisations and individuals, ranging from local junior sports clubs and dance schools, to sea cadets and groups working with disabled young people.

Clive Wood said: “I am exceptionally proud to receive the MBE in the Queen’s Birthday Honours. It represents the talent, tenacity and dedication that exists in East Cleveland and Tees Valley in industry, but also within education and community groups that are determined to improve the life choices of local young people.

“We have shown as a company and as an area the importance of apprenticeships, and this honour is also recognition for all the young people who have taken the vocational route and achieved quality careers in highly-skilled professions.”

“This is a region of indomitable spirit and determination that flows through everyone who lives and works here, and I am honoured to have played my part in creating opportunities in business and in the community that have helped individuals and organisations flourish.” 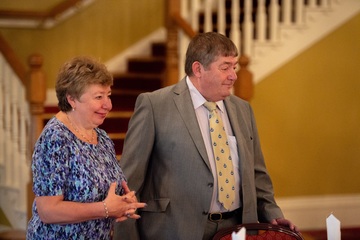