Tees Components has been recognised for its focus on apprenticeships after it was shortlisted for the North East final of a major national awards.

The Skelton-based company has been nominated in the SME Employer category at the awards, which take place on 16th September at the Newcastle Gateshead Hilton.

Part of a programme of regional events for the National Apprenticeship Awards 2019, winners progress to a national final later this year.

Tees Components has been recruiting and developing apprentices since it was established in 1963. It creates roles for an electrical engineering apprentice, a business administration apprentice and up to four machine apprentices annually. As a result of its comprehensive training programmes, 80 percent of its apprentices are offered permanent positions on completion.

The family-run business is currently expanding its workforce through its apprenticeship programme with the recruitment of two new mechanical engineering apprentices. Taking Tees Components’ current apprenticeship cohort to six, the new apprentices will specialise in machining, spending up to four years training with the company, depending upon any previous industry-related qualifications.

Tees Components’ continuing commitment to apprenticeships is reflected by the fact that 40 percent of its skilled workforce are former apprentices.

As one the UK’s most comprehensive and versatile heavy machinists producing precision parts 24-hour-a-day for sectors including marine, defence, nuclear and offshore energy, Tees Components recognises the value in investing in its current and future generations of its workforce.

As such, the company has strong links with local schools to offer work experience, factory tours, mock interview practice and CV workshops to develop young people’s skills and confidence. It also works incredibly closely with colleges and training providers across the region to support Science Technology Engineering and Maths (STEM) career paths for young people.

Managing Director Sharon Lane swapped studying a degree for an apprenticeship in engineering and believes the responsive system is the backbone to a strong company, driving new skills and future growth.

Sharon Lane said: “It is fantastic to be recognised for our commitment to apprenticeships, especially from such a prestigious national awards scheme. Apprenticeships have always formed the bedrock of our workforce development and will continue to do so, which is why it is so important for employers like Tees Components to have good relationships with schools, colleges and training providers.

“I am extremely passionate about skills retention in the North East and ensuring our local young people can have access to positive work experience and employment opportunities. I have seen first-hand the benefits of apprenticeships, for my own career, but also for a large group of talented people we have in the business. We are keen, as well as supporting apprenticeships for our business, to also encourage other employers to do the same.” 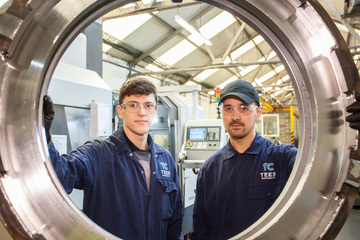