An historic building converted into a £100,000 training facility at Tees Components has been officially opened by the leader of Redcar & Cleveland Council leader, Mary Lanigan.

The family-run engineering firm has equipped the facility with STEM-standard equipment as it continues to increase the number of apprentices it recruits each year as well as supporting the upskilling of its existing workforce.

Situated on the Tees Components’ six-acre site at North Skelton, near Saltburn, the 19th century building was a former milling shop for an ironstone mine.

In addition, the centre also includes a workshop classroom area complete with IT facilities.

On average Tees Components previously recruited two apprentices per year, which, from this year, has been doubled to four as part of its continuing commitment to apprenticeship recruitment and training.

Tees Components is now encouraging Year 11 students completing their GCSEs this school year to apply for the its increased apprenticeship places by submitting their CVs to the company.

The firm recognises the value of practical training, with 40 percent of its skilled workforce and much of its management team starting out as apprentices.

Tees Components is also dedicated to the continual development of its workforce and the investment in the new facility following the company’s highest ever spend on the upskilling of its staff.

To ensure all personnel have the opportunity to develop their skills base, the company has provided additional training in areas such as 3D CAD CAM software, ILM leadership qualifications, ICT, IOSH and NEBOSH Safety training and mental health first aid.

The company’s focus on skills development and career opportunities also extends beyond its own operations and is highly active in the local community.

Its Managing Director Sharon Lane is a Governor of Middlesbrough College, working in an advisory capacity for its STEM Centre, and the business has established strong links with local schools.

In addition, its Office Manager, Claire Meadows is an Enterprise Advisor, working with Outwood Academy Bydales as part of a scheme run by Tees Valley Combined Authority to strengthen relationships between employers and education.

The official opening was also attended by Principal and Chief Executive of Middlesbrough College, Zoe Lewis, together with representatives from local secondary schools.

Cllr Lanigan said: “I was delighted to officially open this fantastic facility here in East Cleveland. I think it’s wonderful that Tees Components have invested so much into their training centre, helping young people launch their careers with an apprenticeship and enabling their current workforce to undertake training and develop their skills so they can progress further within the company.”

Sharon Lane added: “Tees Components is tremendously proud of its role as an employer and as a contributor to the wider Teesside economy. Our investment in this training facility reflects our commitment to provide quality jobs and careers for young people in the area in addition to supporting the continued personal development of our existing workforce.

“Many here at Tees Components have been through the apprenticeship process and we know the value of learning both practical and future skills which underpin the continuing success of our businesses.

“I’m a great advocate for this area and I hope this training facility reflects our confidence to invest in east Cleveland and build on its great industrial heritage.”

Tees Components has been involved in many high-profile complex projects including the Channel Tunnel, the Humber Bridge, and more recently waterjet Tees White Gill thrusters for RRS Sir David Attenborough, the Astute class of submarines, and prototype development for the offshore wind sector. 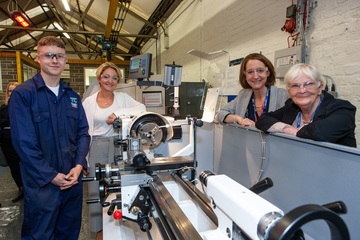