The official naming of the RRS Sir David Attenborough by the Duke and Duchess of Cambridge was also a proud moment for staff at Tees Valley engineering firm Tees Components.

For the company, based in North Skelton, near Saltburn, supplied four of its Tees White Gill thrusters for the £200m polar research ship after being contracted by the Cammell Laird shipyard on Merseyside.

The innovative 60-T3S-QR azimuth thrusters are specifically designed to allow the ship to overcome the challenges of station keeping at sea and provides highly accurate manoeuvrability in any direction, even in heavy ice.

Tees Components designed, manufactured and commissioned the 360-degree thrusters for the vessel, which is owned by the Natural Environmental Research Council and operated by the British Antarctic Survey.

It hit the headlines in 2016 after an online poll to come up with a name overwhelmingly endorsed ‘Boaty Mcboatface’. Instead, the vessel was named in honour of naturalist Sir David Attenborough and the humorous moniker was transferred to its remotely operated submersible.

Tees Components’ design of the globally approved vertical thrusters has contributed to the smooth hull shape and greatly improve the accuracy of the data it will collect.

Sharon Lane, Managing Director of Tees Components, said: “Everyone within this family-run firm is proud of the contribution it has made to the RRS Sir David Attenborough.

“The Tees White Gill thrusters are at the forefront of design and application and have developed an international reputation for their innovation and excellence.

“The thrusters are an example of great British design and expertise and reflects the engineering capabilities of Tees Components.”

Sir David Attenborough joined the Duke and Duchess at the naming ceremony at the Cammell Laird shipyard in Birkenhead on Thursday (26 September).

The 130m-long, 15,000-tonne “floating science lab” will undertake world-leading research into the effects of climate change in the Arctic and Antarctic. 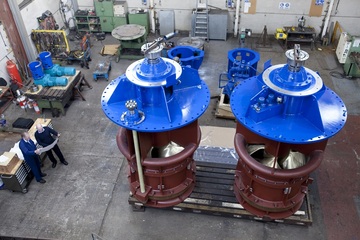