Thirteen has made a significant contribution to the education of children at a school in Africa.

Pupils at Livingstonia Community Day Secondary School in Malawi are now able to learn ICT skills for the first time thanks to a donation of IT equipment from Thirteen to charity, the Turing Trust.

The housing company donated 54 old PCs and laptops to the charity last year, which were shipped to the African continent, enabling an additional 1,154 Malawian students to learn vital IT skills.

James Turing, founder and CEO of the Turing Trust said: “The support of organisations like Thirteen makes a huge difference to the lives of young people. Just this one donation means that students at Livingstonia Community Day Secondary School are now learning vital digital skills for the first time. We look forward to continuing to work with Thirteen so that old PCs, laptops, peripherals and phones can be reused and put to good use through our work in the UK and Africa.”

In addition to offering educational opportunities to the youngsters, the Turing Trust also monitors the environmental impact of donating the computers rather than them ending up in landfill.

Thirteen’s donation offset 31 tonnes of CO2 emissions, which is the equivalent of planting 78 trees, or offsetting the annual carbon footprint of three people in the UK.

Hassan Bahrani, Thirteen’s networks, infrastructure and mobile service implementation manager, said: “We’re delighted to be working with The Turing Trust and it was heart-warming to see images of the students using our old equipment to boost their education. Not only is recycling the equipment providing opportunities for young people who might not otherwise have access to digital skills, but it has positive environmental benefits too.”

To date, the charity has reused more than 4,200 PCs donated by a variety of organisations, enabling more than 41,000 students to gain a digital education.

All the data on Thirteen’s donated equipment was destroyed to The Waste Electrical and Electronic Equipment (WEEE) standards.

Editor’s notes: Thirteen owns and manages just under 34,000 homes from an area spanning North Tyneside to York, with the majority in the Tees Valley, making it the largest landlord in the North East.

Thirteen develops as well as manages homes, offering a range of properties and options, including rent, shared ownership and outright sale. It is also one of the ten largest employers in the North East.

back to Thirteen Group 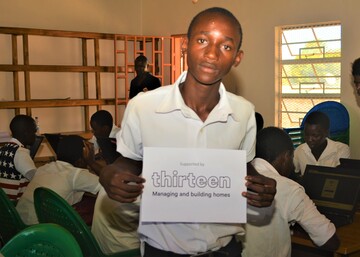 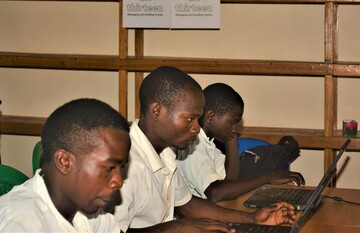