ASCOT SCHOOLBOY RACING TO THE TOP IN MOTOR SPORT

An Ascot school student is celebrating after taking the first steps on the road to a career in motor racing after achieving his racing licence and signing with Elite Motorsport to compete in the 2020 Ginetta Junior Championship.

William Vincent, 15, who lives in Chobham near Woking, has recently won the Rookie Cup in the Daniel Ricciardo Series (DRS) kart racing competition after taking part in events across the country in the 100cc racing kart.

He has also benefited from coaching from Rob Wilson, an internationally recognised racing driver and master instructor and regular trainer in the worlds of Formula One and many other race series.

William is following in the footsteps of his father, Chris Vincent, who successfully competed in Formula Vauxhall and Formula Renault competitions, including racing for ex Formula One driver Martin Donnelly’s race team, before making the move into business and founding V4 Wood Flooring.

Chris Vincent said: “William has been racing since he was 5 years old and driving in Bambino Karting. He has done exceptionally well to win the Rookie Cup and progress to driving with the renowned Elite Motorsport team in the Michelin Ginette Junior Championships.

“I am very proud of his achievements so far and very excited to see where his ambition and determination take him.”

William’s aspiration is to follow in the footsteps of Jensen Button and race in the Super GT Championships in Japan. He hopes to make a career in motor racing, either as a driver or a race engineer and has secured a place at the Motor Sport College at Silverstone.

William said: “I love the buzz and adrenalin of racing; which I think I get from my dad who is still very involved in the sport.

“I am looking forward to racing the Ginetta at some brilliant circuits next year and really want to thank my family for supporting me, particularly my dad and grandad.”

Eddie Ives, team owner of Elite Motorsport, said: “I’m delighted to welcome William onboard in our 2020 Ginetta Junior squad. William clearly has racing in his blood and he is an excellent addition to the team. I can’t wait to start our testing programme to hit the ground running for round one at Donington Park.”

Christine Cunniffe, BA Hons MMus MBA, Principal of LVS Ascot, said: “This is an outstanding achievement and we are all very proud of William. We are all very excited to see his racing career progress and wish him every success in the future. William is an asset to the sport and to our school, LVS Ascot”

V4 Wood Flooring was established in 2001 by entrepreneur Chris Vincent and his older brother, Nathan Vincent.

Basedin Woking, Surrey, the family-run business has four warehouses that amount to 35,000 sq. ft and employs 40 members of staff.

Selling to retailers, V4 manufactures and provides quality, hardwood flooring to a network of approved dealers throughout the UK. It has a range of flooring products, which come in three ranges, three grades, ten collections, three finishes and six surfaces.

The company prides itself on its environmentally-friendly policy and is committed to finding new ways of producing flooring that lessens the impact the industry has on the environment. V4 is FSC and PEFC certified, with its hardwood is sourced only from well-managed and sustainable purpose-farmed forests in Asia and Europe, where several fast-growing saplings are planted to replace every tree that is felled.

back to V4 Wood Flooring 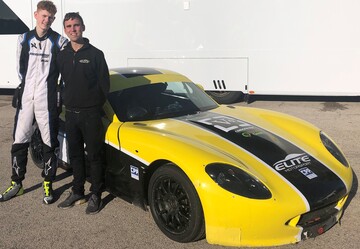