The club for U16s with autism, ADHD, Physical, and other learning difficulties, competed in the ‘Want to Play’ league in Nottingham.

The club was founded in July 2019 by Vernon Thompson and had three players. Now the team has grown to 15 players and is hoping to welcome even more budding football stars to the club by the end of the year.

Martin Chauntry , business manager at Renault and Dacia Mansfield, said: “Though there are so many wonderful local sports teams in the area, we knew we wanted to support Sherwood Colliery Ability Counts Juniors FC as a dealership.

“One of the key Vertu Motors values is ‘opportunity’, and that is exactly what this team offers the children, an opportunity that many other teams may not. We wish the players the very best of luck for the season, we can’t wait to see you sporting your new shirts on the pitch!”

Julie Lambert, coach at Sherwood Colliery Ability Counts Juniors FC, said: “The support from Bristol Street Motors Renault and Dacia Mansfield is invaluable. We are a small club so sponsorship can be hard to come by, but the children deserve the opportunity just as much as any other local team.

“The players are thrilled with their new shirts and are really looking forward to showing them off at their next game.” 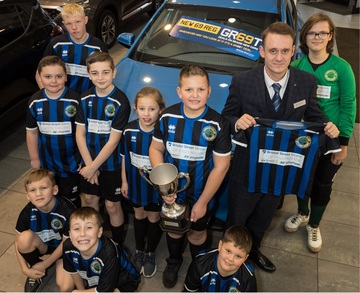