An apprentice at Bristol Street Motors Ford Wigan has been named as Ford’s Apprentice of the Year.


The aim of the Ford Apprentice of the Year Awards is to celebrate the success and achievements of apprentices from a range of disciplines, at all levels. The awards also acknowledge the dealers which employ the apprentices, in addition to the support and training provided to them to enable them to qualify and thrive in their chosen fields.

James said: “I feel very proud to have been nominated and to have won this prestigious award; to come first out of all 2nd year Ford apprentices is a huge achievement!

“I’m thoroughly enjoying my apprenticeship and I have aspirations of staying at the dealership, developing my skills and becoming a master technician.”

Kenny Jones, general manager of Bristol Street Motors Ford Wigan, said: “I’m really pleased for James, this award is well deserved and reflects the level of hard work and dedication he puts into his job on a daily basis.
“Well done, you should be very proud of yourself!” 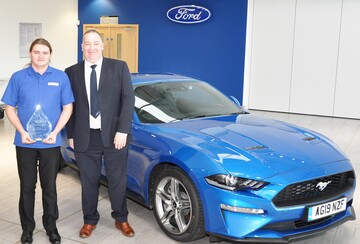