Bristol Street Motors is adding a Hyundai franchise to its Ford dealership based in Morpeth following a £100,000 investment in the Coopies Lane site.

Bristol Street Motors Hyundai Morpeth will offer the range of new Hyundai cars including its hybrid and full electric vehicles.


A newcomer to the market, Hyundai has been around for just over 50 years. It describes its founder entrepreneur Chung Ju-Yungs’ ‘can do’ spirit as driving its thinking, with new and even more innovative models being launched regularly

In 2016 Hyundai launched IONIQ – the only car available in hybrid, electric and plug-in hybrid options. 2017 saw it premiere the i30 N, an exciting introduction into the world of high-quality performance vehicles. This was followed by the KONA electric, the first fully electric subcompact SUV in the European market.

Motability customers will be welcomed at the Hyundai dealership, with a specialist on hand to guide them through the process of choosing the best vehicle for their individual requirements.

Claire said: “This is an exciting venture in Morpeth and demonstrates our commitment to the town. Customers will have the opportunity to take a fresh look at Hyundai, which is a market leader in new car technology.

“In Hyundai we have a franchise that is innovative and forward-thinking, particularly in the ‘green’ market and is at the forefront of technology innovation.

“I am looking forward to introducing customers to the full range of Hyundai vehicles, particularly the hybrid and electric options.

“I am also delighted that Motability customers will be able to choose a Hyundai vehicle that best suits their needs.” 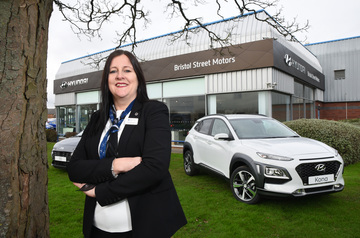