The dealership’s donation has enabled the club to buy the kits for the 2019/20 season, for which they would usually rely on fundraising to help with the purchase.

Team Gosforth FC U11s first team, Ajax, are an amateur team playing in the Pinpoint Northumberland league, 2nd division. The club has teams across U7 to U15 age groups.

Liam Fenwick, general manager at Bristol Street Motors Vauxhall Newcastle, said: “It’s really important for us as a dealership to be involved with our local community and supporting budding young sports stars is a great way for us to do that.

“I’m pleased our donation has been able to provide the U11s with a new training kit which means any fundraising that the club receives, can help with getting the players to those all-important matches and tournaments.”

Craig Fawcett, manager for Team Gosforth Ajax U11s, said: “The aim of our club is to offer a fun, engaging and social environment to children of all ages, whilst maintaining a high standard of coaching to ensure that they develop and progress in the game.

“We often struggle to raise money to buy kits for the team, so we are hugely grateful for the support from everyone at Bristol Street Motors Vauxhall Newcastle. The kits look great and the kids are proud to be wearing them for the season.” 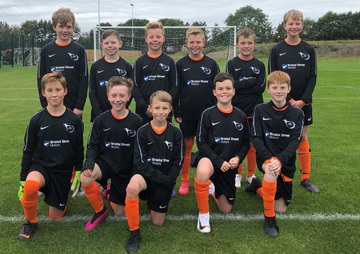