Bristol Street Motors West Bromwich Ford has given a welcome boost to help create an inter-generational film project by young people in Wolverhampton, with a donation of £1,000.

Harvest Temple (New Testament Church of God) in Wolverhampton is showcasing ‘Standing on the Shoulders of Giants’, a documentary-style film that engages the African Caribbean community across the generations as they discuss experiences of their Windrush journey and migrating to the UK.

The project comes ahead of Windrush Day, which takes place on 22nd June every year, encouraging communities across the country to celebrate the contribution of the Windrush Generation and their descendants

The documentary brought young people from Harvest Temple and elders from the Caribbean community together to learn about the arrival of the families from the West Indies over 70 years ago, and what it meant to the existing community and the newcomers settling in the city at the time.

Harvest Temple’s Windrush project was chosen to receive the funding after the neighbourhood organisation applied to the Social Responsibility Awards, a community initiative backed by Vertu Motors plc, the Group which operates Bristol Street Motors.The donation was used to assist with the interviews, filming and creation of the final DVD, to be launched at a special event hosted by the young people from the community church, as well as promotion to raise awareness of the project.Joseph Jackson from Harvest Temple (NTCG) said: “Through this fantastic donation, we have been able to bring the generations closer together and as a result, our younger community members are developing an appreciation and improved understanding of the experiences had by the elders.

“We are keen to share the knowledge and experiences of African Caribbean elder generations to our younger audiences, who may not be aware of their family history and what their parents and grandparents had to go through when they came to Britain in the 1950s and 60s.

“It is very much hoped that they will see it as a badge of honour and a privilege to take hold of the baton and run their own race with great pride, hence the title ‘Standing of the Shoulders of Giants.’

“We thank Bristol Street Motors for the kind donation, which will help make a positive impact in the Wolverhampton community.”

Phil Rumbles, general manager, Bristol Street Motors West Bromwich Ford, said: “We are delighted to assist Harvest Temple in such an interesting and culturally significant project, which not only has the ability to connect the younger and older generations but to encourage young people to embrace their own history, and as a result, further build on the positive community actions that the church has undertaken.”Vertu Motors plc is working in conjunction with New Testament Church of God (NTCG) to deliver community-based social support schemes which offer opportunities for local people to improve their wellbeing through its Social Responsibility Programme.

Here are links that can be used to view the short film (14:45 mins) 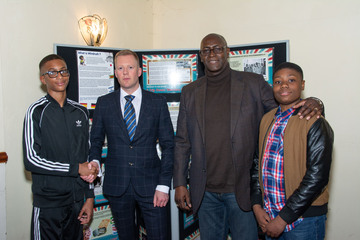