The dealership has kitted out the U11s, who play in the Central Warwickshire Youth Football League (CWYFL), with new strips for the team when playing games at their home ground.

The U11s have had some good fortune over the years winning the CWYFL winter cup on three occasions.

David Howe, general manager at Bristol Street Motors Ford Kings Norton, said: “I’m thrilled we are able to support the Bromsgrove Sporting FC U11s with their exciting season.
“As a dealership, it’s important for us to be involved with our community and supportive of local causes such as budding young football players. Best of luck for the rest of the season!”

Mark Whitehouse, team manager at Bromsgrove Sporting FC, said: “We really appreciate all the support we receive from local businesses such as Bristol Street Motors Ford Kings Norton. The sponsorship means a great deal to the club and the lads are really pleased with their new kits.”


Since flotation in December 2006, the Group has established itself as a major player in the United Kingdom automotive retail sector. The Group currently operates 127 franchised sales outlets and 3 non-franchised sales operations, representing 25 manufacturers, from 100 locations across the UK. 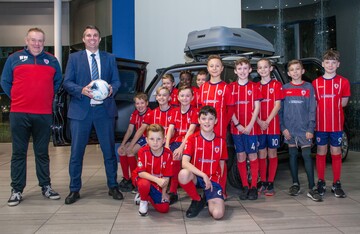