A Livingston man is working tirelessly to help his local community during the coronavirus pandemic.

Craig Fowler, who works as a technician at Macklin Motors Suzuki Edinburgh and is chairman of Livingston Round Table, has been collecting and delivering food for families and individuals who are self-isolating or shielding and unable to leave their home.

Race Director of Livingston Soapbox Race and former Livingston RFC coach has been approached for a variety of essentials, from baby milk to bread. Craig met every one of these vital local needs by co-ordinating the response from Livingston Round Table members and their supporters who are helping him collecting and delivering food across West Lothian to locked down families.

On a daily basis, well over 100 local families in West Lothian are receiving school meals and other provisions thanks to the work of Craig and his team of volunteers. He is also working with the Morrisons supermarket in Carmondean to help restock local food banks.

As well as distributing food, Craig has been helping the West Lothian Community Midwife’s team with PPE, and by stocking up St John’s Hospital maternity ward with much-needed toiletries for new mums during this stressful time where they are not allowed visitors. He has also teamed up with local West Lothian based distiller, Matugga Rum and is now assisting with the provision of much needed liquid hand sanitiser to front line key workers including doctor surgeries, community midwives, police officers, postal workers and St John's Hospital staff.

Edinburgh Rugby has recognised Craig’s endeavours with its first ‘It’s Good to Give’ local hero award.

Craig said: “When I was furloughed, I knew that I couldn’t just sit at home and do nothing. My position as chairman of the local Round Table meant I was approached to help people who weren’t in a position to go out shopping and I galvanised a team of volunteers who have been fantastic in collecting and delivering food, including school lunches, for families and individuals across West Lothian.

“I really didn’t expect any sort of recognition because this is a team effort, but I am grateful to Edinburgh Rugby for the award, which acknowledges the work of everyone involved.”

Robert Forrester, chief executive of Vertu Motors plc, the parent company of Macklin Motors, said: “It is fantastic to see our colleagues stepping up and showing that our values are alive.

“Craig is a shining light and I am proud that he is doing so much to help his local community at this challenging time. Well done Craig, congratulations on the award, and keep up the good work.”

Anyone wishing to help Craig and his volunteers can donate here https://www.justgiving.com/crowdfunding/lrt 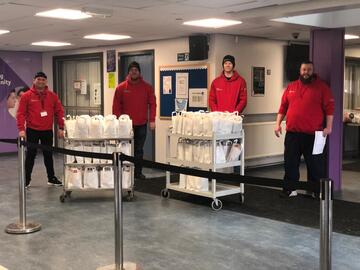