The dealership, based on Cosgrove Close, has supported the U13s team with new football kits, training tops and jackets.

The club includes a junior section starting from six years old, including boys’ and girls’ teams, and the men’s first team, who play semi-professionally in the Midland Premier League.
As well as sponsoring the football kits, Bristol Street Motors Ford Worcester has become the official main club sponsor for all social media activity, meaning that the club’s tweets, Facebook and Instagram posts all carry the Bristol Street Motors Ford Worcester branding.

The Stourport Swifts are based at Walshes Meadow in Stourport on Severn and the club, founded in 1882, has a strong local history.

“As a dealership, community support is very important to us and Stourport Swifts are a great fit. The team have fantastic history in the local area, and we are proud to be supporting them.”

Quentin Townsend, first team manager of Stourport Swifts, said: “We’re really grateful to Bristol Street Motors Ford Worcester for their support and I know the U13s are really looking forward to showing off their new kits.

“Stourport Swifts have been a key part of the community for many years and it’s fantastic to continue to receive great support from local businesses.” 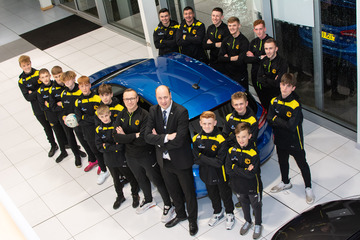