A Motability specialist at Bristol Street Motors Ford Birmingham, the first dealership to open in the Group, is celebrating 40 years’ long service with the Group.

Kevyn Robinson, 62, began his career in February 1981 as a new car sales executive after gaining his motor retail experience working for his late father’s dealership.

Kevyn has been a Motability specialist for more than 20 years helping people with a disability, their families and their carers to lease a new car that is most suitable for them utilising their disability benefit.

When he left school, Kevyn originally went to art college but decided to make the move into motor retail because he wanted to work for his family business alongside his father.

Kevyn is a keen kickboxer and achieved his black belt six years ago. He is looking forward to lockdown restrictions being lifted so he can get back to the gym but also so he can spend time with his new-born grandson, Oskar.

Kevyn said: “I have thoroughly enjoyed the last 40 years working for Bristol Street Motors. I have stayed with the Group throughout my career because the company’s values and commitment to colleagues are second to none, and it is a very secure place to work.

“The sector has changed so much over the years, back then we had to hand write finance agreements! Some popular models that I remember selling were the Cortina, Capri, Sierra, Escort and Granada.

“To anyone looking to get into the motoring sector, I would say do it! Vertu Motors holds high customer values built on trust and honesty. Many of my customers have become personal friends over the years and I have made many wonderful friendships with colleagues.”

Robert Forrester, chief executive of Vertu Motors plc, the parent company of Bristol Street Motors, said: “It’s very important that we recognise our long-standing colleagues who have put so much hard work and commitment into our business. To work for a company for 40 years shows a tremendous level of dedication.

“Kevyn is a fantastic and well-respected colleague who goes the extra mile for his customers and I’m very grateful for his dedication and loyalty.” 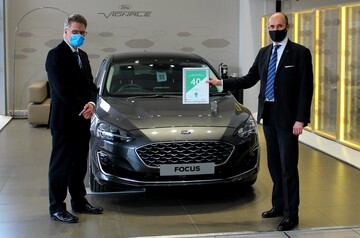