The Taxi Centre, part of Vertu Motors plc, has relocated to a new site in Glasgow following a £100,000 investment.

The new premises, based on Kennishead Road, has an indoor showroom and is designed to offer a better customer experience for customers.

The Taxi Centre has four of the most popular models on display; the new model SEAT Leon estate, Hyundai IONIQ, SKODA Octavia and Ford Tourneo Custom. It is also showcasing the fully electric Nissan LEAF and anticipating the arrival of new models including the hybrid SKODA Octavia and SEAT Leon.

The Taxi Centre is also expanding its team with a new sales executive based at the new premises, Gary Ranson, as well as two new area sales managers Tony Stevensand Billy Singh, who will work alongside the existing team to assist taxi drivers across the UK to find the ideal car for their business.

Billy Singh has been in the industry for over 25 years, working in the parts department for EuroCar Parts and LTI. He is no stranger to the taxi industry as his main role involved supplying parts and servicing kits to taxi firms around the UK.

Also, with 25 years’ experience in the motor trade, is Gary Ranson who has covered various roles and has a wealth of knowledge of the taxi trade.

Tony Stevens built up his own successful taxi firm and has joined the team after seeking new challenges, keeping within the taxi industry.

Steve Dunn, general manager at The Taxi Centre, said: “The Taxi Centre had a record month for sales in March, and we did our very best to support the taxi industry during lockdown.

“We’re now settled into our new home here in Glasgow and delighted to be working with our customers again. The new dealership looks fantastic and offers our customers a different kind of experience than they may be used to when buying from us previously.

“We also have a great barista facility where customers can enjoy a hot coffee or tea while seeking advice from our knowledgeable team who will guide them through the buying process.

“I’d also like to take a moment to welcome our new team members Tony, Billy and Gary; it’s a great time to join our expanding and developing business.” 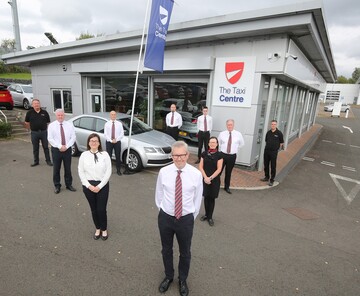 Steve Dunn, general manager at The Taxi Centre (front) with some of the team
Download Large Image
Latest Tweets from @Recognition1st :