Vertu Motors plc, the group which operates Vertu Mercedes-Benz, has invested £5 million in a new Mercedes-Benz dealership in Reading, as part of a major refurbishment project.

The new dealership’s showroom and workshop have been being extended. The showroom size has been increased to 14 cars and the service reception designed and refurbished to the latest Mercedes-Benz corporate standards.

In addition, the new site incorporates a three-lane undercover vehicle drop off area which allows customers to have a valet parking style ‘drive-thru’ experience when dropping off their cars for a service.

A new wash and valet facility, which includes a dedicated smart repair bay means, in addition to standard service, customers will be offered minor cosmetic repairs as part of the dealership service, extended customer parking and an enhanced used car display will open within the next couple of months.

Mark Gibbings, market area director, Vertu Mercedes-Benz said: “Vertu Motors has invested a huge amount of money in this project and it demonstrates a fantastic amount of confidence in our colleagues, the Reading area and our customers.

“The new dealership is one-stop shop for all of our customer’s needs and they can be assured they will receive the excellent customer service they are used to, in superb surroundings with fantastic facilities.” 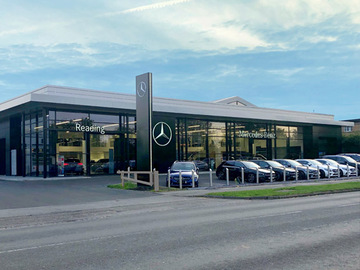