Determined jobseeker James Collingwood, who was offered a job at Bristol Street Motors by Chief Executive Robert Forrester after a TV appearance ten years ago, is now a senior manager at one of its dealerships in Sunderland.

James was 23 in 2012 and had been unemployed since leaving college. He had sent out more than 200 CVs and filled in numerous job applications forms, but to no avail.

Just as he was starting to lose hope, James appeared in a live BBC TV discussion about the Budget announcement, hosted by Victoria Derbyshire in the North East.

As luck would have it, Robert Forrester also had been asked to take part as a major regional employer.

Robert was impressed with how James came across, including how articulate and personable he was. This led to James being offered an interview, which proved successful, and he was offered a job as a Trainee Sales Executive. As part of the new role, the Group helped James in learning to drive.

James, now 33 and a dad-of-two, has never looked back as he found that sales was a job he not only enjoyed, but also one in which he excelled.

After completing his traineeship and then spending several years as a Sales Executive, today he is a Senior Manager at Bristol Street Motors Sunderland Vauxhall in Alexandra Avenue, Hylton Riverside, where he oversees a team of ten people.

James, who is engaged to Rachel, said: "It was a career I had never considered, but I found I loved selling cars. I always have been fairly confident and a people person, so sales, where you predominantly deal with customers face to face, turned out to be my dream occupation.

"I can never thank Robert Forrester enough for seeing my potential, having faith in me and giving me, what has turned out to be a fantastic opportunity.

"It just goes to show that one moment or a chance encounter can totally change your whole life.

"While I was blessed and lucky, I grabbed what was presented to me by Robert and Bristol Street Motors with both hands and have worked very hard to get where I am today."

Robert Forrester said: "I couldn't believe when I first met James that he was out of work and had been for so long. He was polite, articulate and had something about him; I decided there and then that he deserved to be given an interview.

"My initial instinct has certainly paid off, and not just for him, but also for Bristol Street Motors as he has proved to be a real asset to the company.

"James's work ethic, motivation and appetite to learn and progress has been second-to-none and his promotion to a Senior Manager within the business is well-deserved."

James, who is dad to Alfie, 18-months, and Ellie-Rose, eight, added: "I have to admit I nearly missed out - I was so nervous about appearing on live TV that, when the taxi was on its way to take me to the programme, I nearly bottled out.

"But my nana, Val, said 'go on, you've got to do it - you never know something could come out of it' and she couldn't have been more right."

James is determined to keep on progressing at Bristol Street Motors.

"I want to keep climbing the career ladder. I want to go all the way to the top," he added. He is full of paise for the training and support he has received from his managers during his ten years with Bristol Street Motors.

In his latest role as a Senior Manager, James, who lives in Wingate, is responsible for monitoring financial performances against budget, in addition to coaching and developing his team's skills to achieve business objectives and to deliver fantastic levels of customer experience. 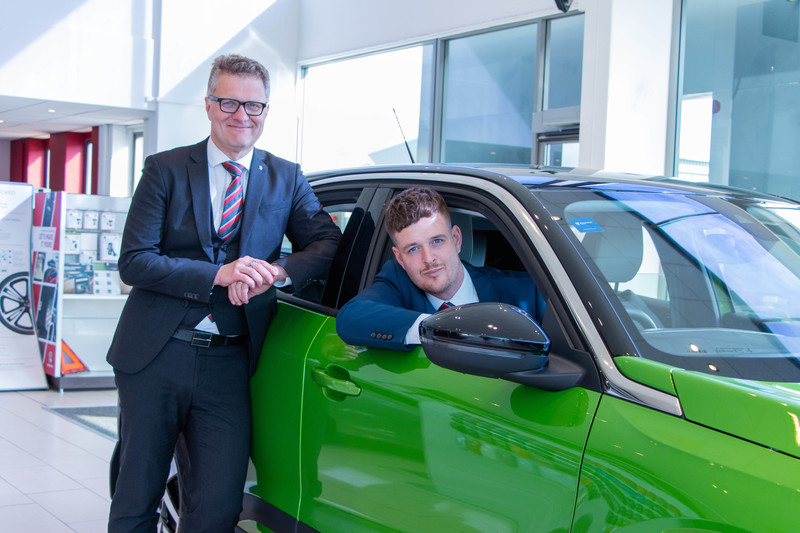