Vansdirect is helping to keep the Fans Museum on the road.

With support from Bristol Street Motors, the national online van retailer has donated a Mercedes Benz Vito Tourer to the museum to enable it to continue to visit venues across the country including schools, hospitals and care homes.

The Fans Museum, which is based in Sunderland, has a collection of football memorabilia including match worn shirts from Cristiano Ronaldo and David Beckham to trophies from iconic matches. The museum exhibits tour the country to allow people who may not be able to visit the museum due to ill health or distance to view them.

Michael Ganley, founder of the Fans Museum, and Sunderland football legend Bobby Kerr visited Vertu House, head office of Vertu Motors, parent company of Bristol Street Motors and Vansdirect. They met Vertu Motors chief executive and Burnley fan Robert Forrester and commercial vehicle director Simon Elliott, who is a former Scunthorpe United director, to show off some of the vast array of memorabilia the van will be used to transport.

Michael said: “As passionate people who want to create something unique for fans of all ages and abilities, we can now support events in isolated areas we may not have been able to reach in the past. The generosity of Vandirect and Bristol Street Motors has made this achievable, allowing us to continue transporting our volunteers, many of whom do not have access to a vehicle and rely on local transport, and our wonderful memorabilia.”

Simon Elliott, commercial vehicle director at Vansdirect, said: “The Fans Museum is a wonderful organisation that helps to bring joy to football fans across the country. I’m really pleased we could do something to ensure it can continue the amazing work it does.”

Robert Forrester, chief executive of Vertu Motors, said: “As a football fan I understand the interest in these unique items. To help the Fans Museum share its exhibits across the country is something we are delighted to be able to do.” 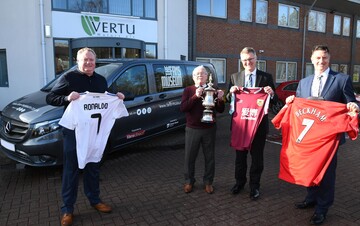