Vertu Honda Motorcycles Nottingham has now relocated from the existing site on Haydn Road to a new home forming part of a Honda Franchise Supersite on Lenton Lane, Nottingham.

The new dealership offers ride times of less than 50 minutes from Leicester, Loughborough and Derby while being perfectly located to serve the city of Nottingham. This location complements Vertu Motorcycles’ long-standing dealership in Grantham which covers Lincolnshire and South Yorkshire.

The new facility boasts an outdoor café which will be open all year round, restrictions permitting, alongside a two-story showroom offering new and approved used Honda motorcycles as well as used motorcycles from other manufacturers. A clothing and accessory store and servicing and MOT facility will also be onsite.

Colleagues will move over to the new site, which will be overseen by recently promoted brand director of Vertu Motorcycles, Mark Goode.

Mark Goode said: “This investment will create a focal point for bikers from right across the East Midlands, with expert sales and service colleagues who are passionate about motorcycles. Our whole team at Nottingham are bikers themselves.

“It will be much more than a sales outlet, although we will offer a wide range of new and used motorcycles and with the facilities on offer, a superb ride-to destination and community hub for bikers. When the current Covid restrictions permit, Jamie and the whole team will be delighted to welcome customers new and old to the showroom and the new café.” 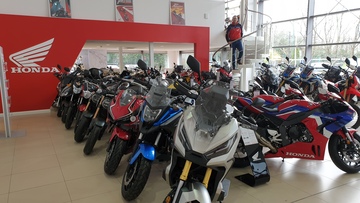