Vertu Toyota Chesterfield is helping students from St Mary’s Catholic High School to be creative and design their dream vehicles.

Pupils at the local secondary school took part in the Toyota Dream Car Contest 2020 to draw and paint fantasy vehicles for the future. The competition has one rule; all vehicles must help to protect and sustain the world’s natural environment.

Vertu Toyota Chesterfield has supported the international competition, organised by Toyota, by awarding its own prizes to the top three drawings at the school. The Toyota Dream Car Art Contest invites children from all corners of the globe
to share ideas about the future of mobility by designing their dream cars.

The students’ artwork will now be entered in the national competition and then, if successful, advance to the global contest.

The three winners were:

David Littlewood, general manager at Vertu Toyota Chesterfield, said: “We have done this competition for three years now and each year the young people excel themselves.

“Each drawing was very imaginative, and I loved hearing about the eco-friendly aspects of the vehicles; it was hard to pick only three winners!”

Craig Longmuir, head of art at St Mary’s Catholic High School, said: “The pupils have thoroughly enjoyed taking part in the competition and there’s been some fantastic vehicles created.

“The Dream Car Contest is a fun yet informative way for young people to think about how we can be more eco-friendly in our day to day activities, which is very topical at the moment.” 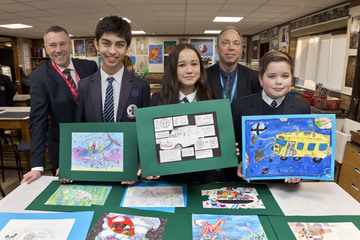