As the current 50 percent target is close to being met by some wind farm developers, Sir Michael now wants the higher target to be set for the remaining £550m spend to 2025. Within the 60 percent target, which will include operating expenditure, he recommends at least 50 percent of capital expenditure to be sourced within the UK.

Sir Michael also says that expenditure on each wind farm development should be reported in a more transparent way that includes added value in both jobs and local skills.

The report also recommends the UK offshore wind industry should agree a ‘sector deal’, placing it at the heart of the Government’s Industrial Strategy and giving it equal status with sectors such as pharmaceuticals, defence and aerospace.

To support this proposal, the report highlights the need for a supply chain accelerator programme, as recommended by the Offshore Wind Council, which would encourage greater collaboration, innovation and support new entrants to the market with exporting technology and services.

This would build upon the Government’s new Supply Chain Competitiveness Programme, which should be used to target areas like the North East, which should become the leading centre for new offshore wind technology.

Sir Michael’s report also highlights the challenge facing the supply chain in terms of business planning and investment, due to uncertainty surrounding dates of future licences and Contracts for Difference (CfD) auction rounds.

Given that public spending is already allocated up to 2025, Sir Michael recommends the Government set out the full timetable for each future auction, helping the sector to plan, invest and recruit.

He recommends the Government should confirm the quarter in which the 2019 auction will take place and that the next auction will be held in a specific quarter no more than 18 months later, combining these announcements with fixed dates for further leasing rounds from the Crown Estate and the Crown Estate in Scotland.

The headline recommendations in the report are:

Commissioned by Wilton Engineering, the report considers the detail of contracts undertaken by the firm and its partners in evaluating the effectiveness of the Government’s UK content policy. Sir Michael also consulted companies and organisations from across North East England and the wider UK offshore industry to compile the report.

In 2017, Wilton Engineering won contracts from Steelwind which has large fabrication facilities and are based in Germany. Its client, Ørsted the Danish company, has been awarded offshore wind licences from the Crown Estate and the Department of Business, Energy and Industrial Strategy, most notably for Hornsea Project One, off the East Coast of the UK.

Sir Michael Fallon said: “This is a pivotal moment for offshore wind. The huge investment to date has repaid the confidence shown by the Government in its future over the last six years.

“But some of that investment has gone to European companies with no consequent impact on UK skills and productivity. The priority now must be to ensure that more of this investment leads to the bigger prize, a genuinely competitive UK industry that can help build the wind farms now being envisaged in the Indian Ocean, the Sea of Japan and off the north eastern US seaboard.

He added: “If the sector is able to invest as a result of higher local content, it can grow and export throughout the world. Given the explosion of interest in offshore wind in overseas markets, positive policy, strategic planning and early investment could deliver more than 25,000 jobs in the UK over the next decade.”

Bill Scott, Chief Executive of Wilton Engineering, said: “I welcome this report as a major contribution to thinking about the future of the offshore sector in the UK. We are on the cusp of something that can deliver sustainable solutions to the massive growing demand for electricity in the developed world. As we decarbonise, electricity becomes more important and our engineering excellence is providing the infrastructure needed to harness our offshore wind power.

“The North East of England is home to talented and innovative businesses that form a major link in the offshore wind supply chain. However, the UK supply chain needs the Government to maintain its commitment to local content from our own licences. This spur is driving the investment and planning we need to create a viable business sector that could enable green renewable electricity generation to become commonplace throughout the world.”

Sir Michael Fallon, was Minister of State at Department of Energy and Climate Change (jointly with Department for Business, Innovation and Skills) from March 2013 to July 2014. He was MP for Darlington in the Tees Valley from 1983 to 1992, he is now the MP for Sevenoaks.

Wilton Engineering is a multi-discipline Engineering Services provider based at a 50 acre site adjacent to the River Tees in Middlesbrough, North-East England. It specialises in engineering design, fabrication and construction, analysis, and coatings and services for the onshore and offshore energy industry and possess a strong and diverse portfolio of successfully completed projects.

The company was established in 1994 and in 2017 won a contract from Ørsted to deliver multiple transition pieces for Hornsea Project One. Transition Pieces link the foundations of offshore wind turbines with the towers. Each weighs 240 tons, around three times as heavy as a space shuttle.

back to Wilton Engineering 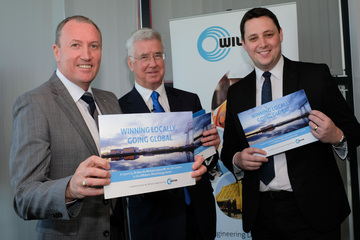